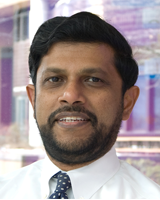 Many of us grew up with the metaphor of ‘germs’ as the enemy and ‘microbe hunters’ as the warriors in an ongoing battle against disease-causing microorganisms. But in the era of the human microbiome, we’ve begun to recognize that the distinctive colonies of microorganisms co-inhabiting our bodies are essential for the maintenance of life and health and that many of those ‘germs’ are on our side. In fact, the metaphor has shifted from “us against them” to “we’re all in this together”; in the words of biology-watcher Lewis Thomas, each of us “could be taken for a very large, motile colony of respiring bacteria, operating a complex system of nuclei, microtubules, and neurons for the pleasure and sustenance of their families”.

OnÂ Friday April 17 2015, Dr. Ramnik Xavier will be at the University of New Mexico School of Medicine to present an invited lecture in the Joseph Scaletti Memorial Catalyst Lecture series: “Genes, bugs and intestinal inflammation”.

Dr. Xavier is the Chief of Gastroenterology at Massachusetts General Hospital (MGH) and Kurt Isselbacher Professor of Medicine at Harvard Medical School; he is also an institute member of the Broad Institute of MIT and Harvard, co-director of the MIT Center for Microbiome Informatics and Therapeutics, and the director of MGHâ€™s Center for the Study of Inflammatory Bowel Disease (IBD).

As both a clinical gastroenterologist and molecular biologist, Dr Xavier studies the molecular mechanisms of innate and adaptive immunity and the genetic variants implicated in Crohn’s disease, ulcerative colitis and autoimmunity.

Recent findings from Dr Xavier’s lab have shed light on the role of autophagyâ€”the process by which cells break down and reuse proteinsâ€”in the development of Crohn’s disease. Â As participants in the NIH Human Microbiome Project, Dr. Xavier’s team is actively investigating the relationship between genes, the microbes living in the human gut, and Inflammatory Bowel Disease (IBD).

Dr. Xavier’s presentation is the keynote lecture of MOLECULAR GENETICS AND MICROBIOLOGY RESEARCH DAY 2015, organized in conjunction with the 50-year anniversary of the School of Medicine; the keynote lecture honors of one of school’s founding faculty members, microbiologist Joseph V. Scaletti, PhD.

Each year, theÂ Joseph V. ScalettiÂ Catalyst LectureÂ features an individual, institution, or idea responsible for accelerating the rate of positive change and forward progress in the areas of biomedical research, healthcare education, or healthcare delivery. In recognition of his ground breaking research in molecular biology and his application of that research in the diagnosis and treatment of human disease as a practicing physician,Â Dr. Ramnik XavierÂ has been invited to present this year’s Joseph V Scaletti Catalyst Lecture.

The Joseph V. Scaletti Catalyst Lecture: A Public Forum for Envisioning the Future of Biomedical Research and Innovative Models for Healthcare Education and Delivery